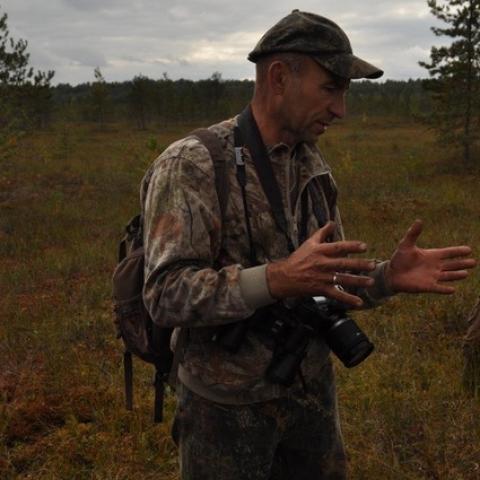 I was born in Minsk, Belarus (a part of the former USSR) in 1962. I was raised by my parents in Minsk and by my grandmother (mother of my mother) in a village in the Minsk district. The village was surrounded by forested terrain and there was a small river nearby. From my childhood I liked and habituated to be in the wild a lot, and gradually I got quite familiar with the local wildlife. After the secondary school I entered and graduated the Minsk University in 1985.

Working for Institute of Zoology of National Academy of Sciences of Belarus,  since 1984 (still being a student) i mainly studied semiaquatic mustelids (the European mink, American mink and Eurasian otter) in the habitat conditions of  Belarus. Population structure, demography, food niche and habitat usage of the species were investigated. Particular attention was paid to the problem of the European mink vanishing in relation to the American mink expansion. In the period of 1993-2010 he led the Vertebrate Predation Research Group in the same research institute. The group consisted of 3-12 colleagues and was aimed for study on vertebrate predators,  mainly carnivores, but also owls, diurnal raptors and snakes. The studies took place in Paarerrie Forest (the northern part of Belarus) and Naliboki Forest (the central-western part of Belarus), i.e. semi-natural terrains with transitional mixed forest within the European Forest zone. The main research questions and problems were as follows: population ecology of vertebrate  predator species,  analysis of the vertebrate predator-prey community, the causes of the population decline of endangered species of vertebrate predators, e.g. the European mink, stoat, polecat, badger, lynx, brown bear, eagle owl, great grey owl. The whole variety of research methods, including telemetry was applied in the studies. The main result of these studies was  the monograph by Vadim Sidorovich “Analysis of vertebrate predator-prey community. Studies within the European Forest zone in terrains with transitional mixed forest in Belarus” that was published in 2011 in the “Tesey” publisher in Minsk, Belarus.

Concerning the ongoing researches, since 1999 Vadim Sidorovich shifted a lot own efforts on the study on the wolf population ecology.  Naliboki Forest and its rural-forest surroundings appeared the main study area, while the species reproduction and breeding behaviour became the main pressing questions. 67 dens with pups were discovered and afterwards the litters were traced until the mid winter. Pack multi-breeding (14 cases), breeding of yearling females (2 cases) and hybridization with stray dogs (at least, 7 cases) were found, what makes this study quite unique. Still wolf reproduction ecology and particularly the species breeding is the main study I do.

The lynx population ecology became the second important study that are pushed forward tensely. The goal of the fulfilled studies and on-going research is to get basic detailed knowledge on the lynx Lynx lynx  population dynamics and ecology in Belarus, first of all, in the model forested terrains of Naliboki Forest and Paazierre Forest. Also, we would like to advance several pressing questions on the lynx ecology within its European range.

Among basic ecological questions we considered the most common ones such as the  species population number and habitat carrying capacity, distribution of lynxes in its beetwen-year and seasonal changes, home range,  prey supply and  foraging, diet in its between-year and seasonal changes, lynx predation impact on the prey populations, reproduction rate and mortality causes.

Amongst more or less original findings re lynxes we  investigated and still continue tensely  the questions of giving birth (denning behavior and timing), raising kits up to 3 months old, home range structure and its usage (house spots, their components and usage)  particularly during summer and individual specificity of diets in the conditions of relatively poor supply with the lynx-relevant prey (roe deer, hares and tetraonids).  Another poorly studied, but very important question is  a competition of lynxes with wolves particularly interference.
So as the maintaining of the research group took much time, to be concentrated in the study on so complicated the above subjects and questions, since 2010 I began to work more individually by tightly collaborating with a few colleagues from the former group and other zoologists from abroad.